It all started in a cupboard… my MINT journey 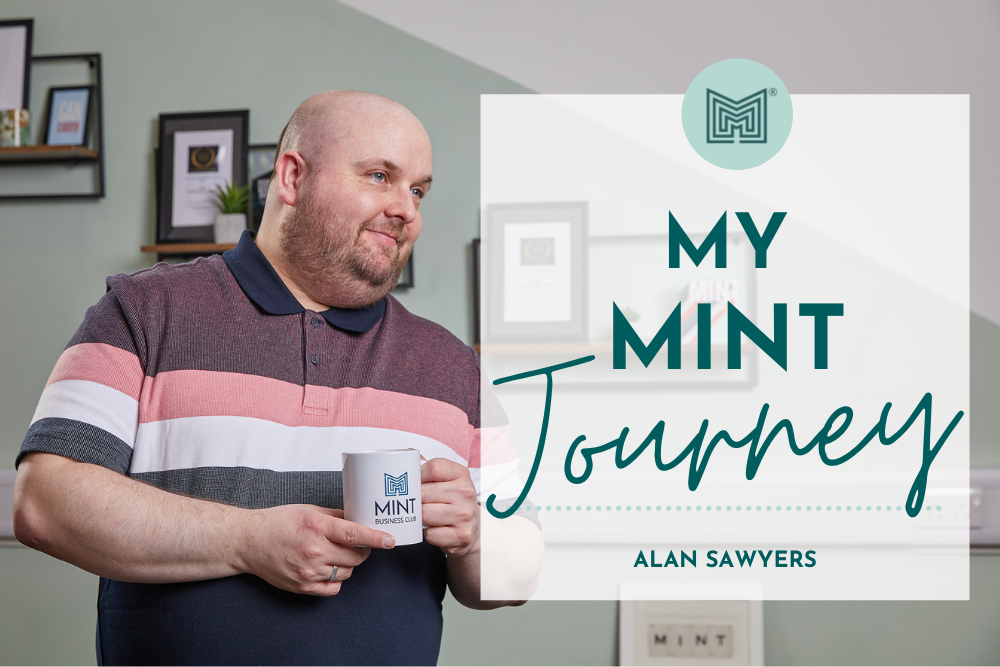 As I sit here on the first day of a new month, the only day of the month I do my finances, I take time out to reflect on the growth and journey of my business(es).

This will be the first full month of being in a brand new unit, having spent most of September and some of August getting moved and sorted.

I wasn’t looking forward to totting up the finances for September, knowing we’d lost a good couple of weeks of sales, and that was going to have had an impact on turnover. And yes, almost everything is down on September last year. But there are some major positives to take from today.

My four businesses combined are only slightly down when you add them all together, which is a relief. But moreover, for the year to date, We’ve reached six figures about two months sooner than we did in 2020.

The latter three all have co-directors and shareholders – family and friends. So when I look at growth, I take EVERYTHING into account. All four of my businesses operate from the same unit, so I look at turnover combined. I’m not an accountant, my stepdad (and co-director in two of the limited companies) does that for me, so I look at top line and not bottom.

This growth story is less about money and more about a very personal and very MINT journey.

The biggest thing to reflect on is the move to our new unit and compare it to where I was ten years ago – even two years ago. We only launched MyMerch Studio in May, and it instantly pushed us into the realms of ‘uncomfortably full’ at the unit we were in before.

In 2011 I registered AS Design North East and in 2012 moved into my first office. It was a part-time business as I always had employment alongside it. Until 2019 in fact.

North East Gifts followed in 2013 and was allocated a small under-counter cupboard with some greetings cards, mugs and tea towels. When we received an order I had to go out and buy a box to send it in. The boxes more often than not cost more than the orders were worth. But it was a start.

NEG eventually took over our spare room (me and my partner Nic who also works on all the businesses and is co-owner of CCS and MyMerch). We had to sit on the spare room floor to pack orders. By this time I’d moved out of the office I had, because one of my freelance clients offered me an in-house role. Probably the only decision in all of this story I regret (apart from it’s where I met MINT member Laura Jayne Thompson who is lush and a very good friend to this day).

In July 2017, we had become frustrated with unreliable mug printing companies so we bought a mug press to print mugs for NEG. I had the idea of offering a mug printing service to other small businesses and we launched Muggins. We registered a new company, CCS Products, with the aim of that business having several sub-brands (we current have four including Halloweenmas which launched in August).

Once we launched Muggins we had to take over our living room to accommodate the new kit, as we’d soon bought 2 more presses and a coaster/heat press.

We took on a little ‘lock-up’ unit for storage. It was 75sqft and good for storing packaging and bulk stock.

Then MINT came along…

In early 2018 I met Nicola Jayne Little. End of story. Only joking… that’s really the beginning.

I’d been a member of the #DoDigital Facebook group and got so much out of the free support that I wanted to give something back, so I bought a place on Nicola’s Facebook Groups training session.

Not long after that, she launched the first bootcamp (small groups for MINT members who want to level-up in their businesses) and I jumped at the chance to join. Nicola and my fellow bootcampers were shocked to hear I had no living room and made me set a personal goal to get my businesses out of there and into premises.

In July 2018, a friend a client of mine, Mark, told me he was going to have to move out of his industrial unit in Blaydon as his business wasn’t doing too well. Bootcamp had given me the confidence to jump on this as an opportunity and offer to share it with him. We moved in and suddenly had around 300 sqft of space. It got us out of the living room but in actual fact wasn’t really much more space once the lock-up stuff came over.

Mid 2019, Mark came to me and said he’d been thinking about moving his business to home and out of the unit completely, but didn’t want to drop us in it. I told him I didn’t want my businesses to be the reason his failed, and that we’d take on the unit ourselves and ‘come what may’. So we took on the full unit which gave us just under 600 sqft. We soon filled that!
In August 2019, Nicola came to visit me at the unit and we’d been talking about me making the move to full time self-employment (like I said, I’d always been employed alongside my own business interests). With a lot of encouragement, I took the leap and went freelance from September 2019.

From January 2020, my freelance business, NEG and CCS were all based at the Blaydon unit. I had all of my businesses in one place for the first time. For years I’d been literally all over the place with absolutely no structure or focus.

April 2020, right in the middle of the first lockdown, we signed a 5 year lease – we had no plans of going anywhere fast.

Also in April 2020 I went back to operating through AS Design North East, but now ‘trading as’ A.S. Design, Web & Marketing.

August 2020, Eat Out To Help Out, I met up with a friend, Paul, who has an events business based in London but also owns a factory in Stanley and other businesses in the UK and has an office in Hong Kong. He told me about a concept he had of launching an on-demand merchandise website aimed at UK based online personalities – TikTokers and YouTubers, and was I interested.

I spent the next 8 months avoiding the question – I was interested but also scared – Paul works internationally and runs businesses he’s not “in” on a daily basis and I knew he would be capable of catapulting any business we launched to that level too. I’m ambitious but I saw his ambition as being something that could potentially drag me out of my comfort zone a bit too far.

Again, with encouragement from Nicola, I eventually said yes and we launched MyMerch Studio earlier this year We invested a scary amount of money in a Direct To Garment printer, pre-treatment machine, more heat presses and lots and lots of blank t-shirts.

Hence by mid 2021 Blaydon’s 600 sqft was nowhere near enough for us anymore, so we started looking for a new place. We looked at a few that just weren’t right. Wrong location, too small, too big, too dirty… I said to Paul “when we find the perfect unit, I’ll know”.

In June, Bill, Nic (partner Nic) and I unit looked at a unit in Prudhoe (2 mins from Sir Pete of MINT). This was the “perfect unit” I had been looking for. I wanted it as soon as we viewed it and would have signed a contract there and then. But it didn’t work like that.

So, after a few months of waiting… and waiting…. and waiting (viewings, heads of terms, contracts, surveys….) and me getting very impatient and anxious, we got the keys at the end of August.

September 2021, we moved into a unit that’s approximately 1,000 square foot but with a mezzanine making it more like 1,500. I have my own proper office for AS Design. We have a production area for CCS and MyMerch, and a packing area for NEG and other ecommerce stuff. We have our own toilet and kitchen for the first time and a mezzanine where we keep stock and bulk storage.

From a tiny cupboard and an idea of selling North East related products in 2013 (we were doing it before everyone copied) to where I sit today – which just feels more and more like the perfect place for all of my businesses every day.

So, if you take anything from this, it’s follow your instinct and believe in yourself… but understand the importance of a support network and people who will help you push yourself that little bit further when you’re just not sure.

I often think, when Mark told me he was thinking of leaving the unit in Blaydon, had I not been in bootcamp would I have had the mindset to suggest sharing it?

I’m not sure I would.