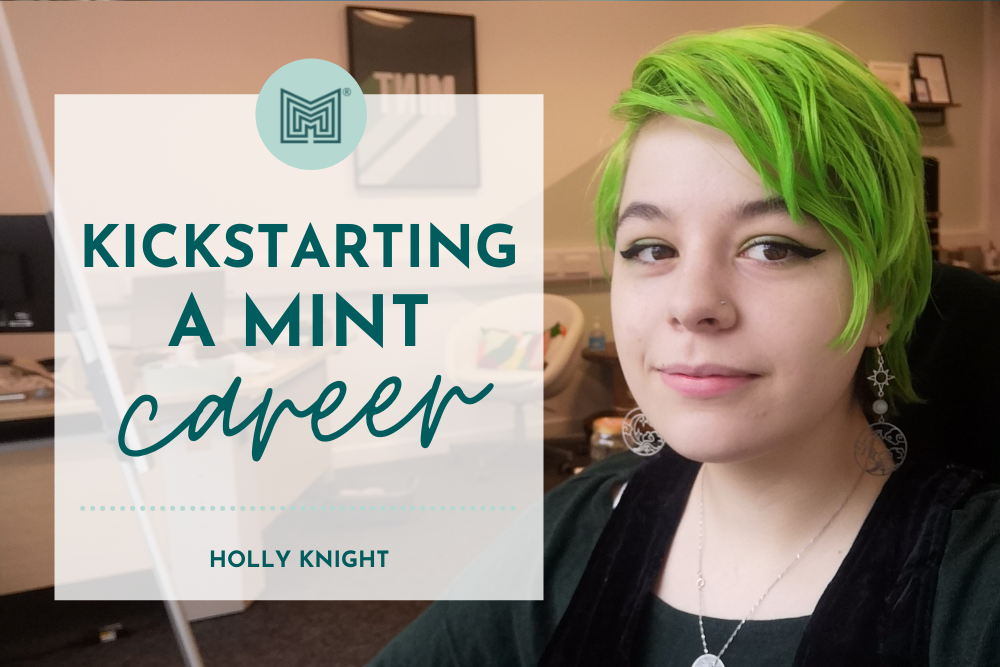 MINT Business Club’s second Kickstart placement started with the business in September and would like be introduced officially to our members, partners, colleagues and friends.

We introduce you to… Holly Knight, who is with us as a Marketing Assistant for the six-month Government-funded placement aimed at giving young people a foot on the employment ladder.

Hey MINTies, you may have seen me lingering in the background of Zoom calls or in the MINT office as of late and it’s about time I formally introduced myself! So hi, I’m Holly knight, I’m MINT’s new Kickstarter!

What does that mean? Kickstart is a Government scheme that helps people who are 16 to 24 find jobs and for six months I’ll be paid by the government to work full time for MINT.

Enough of what I am let’s get into who I am!

I’m a creative person who loves being colourful. I’m easily identifiable by my brightly coloured hair! I’ve been using social media for years, originally posting on Tumblr amassing a small but good crowd and later moving on to TikTok.

My dream job that I would drop anything and everything for is to make documentaries. I have a qualification in Creative Media Production & Technology and my favourite part of that was definitely the documentary making, my best piece of work being on male mental health in the UK because it forced me to think creatively and challenged my way of presenting.

It’s really awesome being able to work with the MINT team who encourage me to be creative and set challenges for me to work out.

What I hope for, while working at MINT, is to develop a small business network, to help people achieve their small business dreams and to expand on my creativeness. What I really don’t want is to work in a small cubicle doing the same thing every day and not being creative at all!

Despite my love of social media, I’m extremely extroverted, if you see me outside of work it’s probably with a group of friends and an iced coffee.

I’m also a huge nerd, loving video games, comics and D&D and love music. I never go anywhere without my headphones, my favourite genre being pop-punk, but there’s not a music style I don’t listen to!

I also have a kitty called Mr Megs.

His hobbies include laying in the sun, bullying my mom’s dog and napping where no one can see him.

If you’re wondering if you have met me before you might have! I used to work for the Tea Enthusiasts and Discovering Durham.

I can’t wait to meet everyone, both at events and on social media!

MINT is an official gateway partner for the Kickstart scheme, placing our first candidates in March. Since then we have placed over 70 young people into placements.