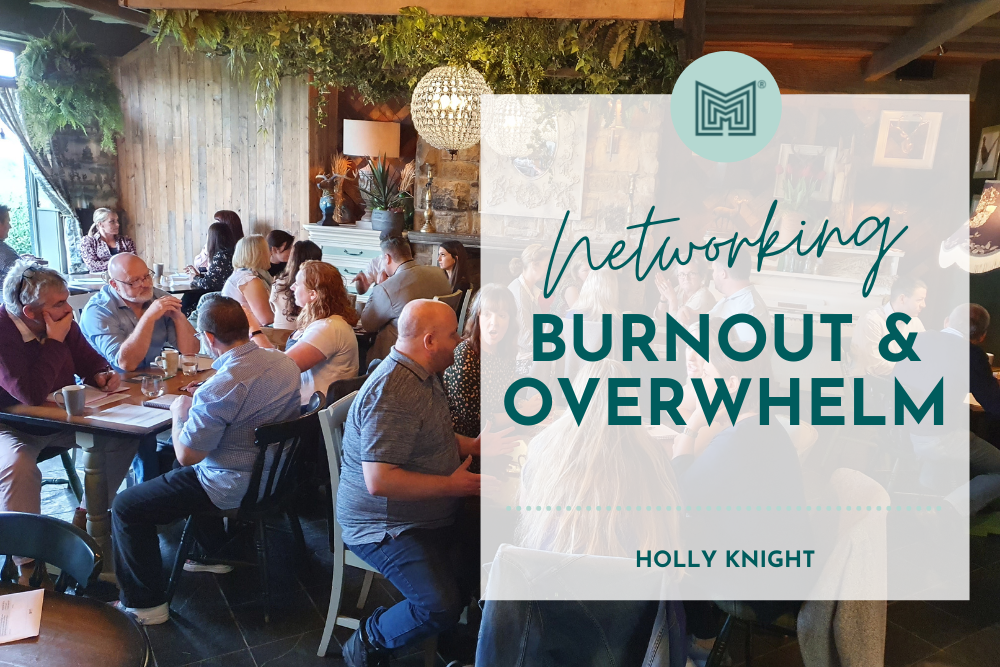 It’s been a long day of networking, you’ve spoken to as many people as you can, some you’ve known forever, some you just met today…then you step out to go home and overwhelm hits!

We’ve all felt it. You leave the event, get into your car and a wave of exhaustion hits. Your brain is swirling with all the actions and follow-ups to do and that rush of adrenaline is still coursing through your veins. Post-networking fatigue is a real thing, both draining tiredness and the thrill of the energy rush too.

It’s not unusual for any of us to attend a networking event, tell people “let’s connect after this, I’ll drop you an email…” and you just don’t.

We were talking about this in the MINT offices (the only person who LOVES networking is Nicola!)…

So we posted into our Business Support group on Facebook to see what our community thought, and the responses were so interesting they prompted this blog:

Everyone responding to the post agreed that they identified with the post-networking fatigue. Some of the comments about networking really did stop and make us think, here’s a few examples

OK so let’s pick up on a couple of those points:

Meet people instead of companies

The overwhelm beforehand is also huge

Here’s a little top from our networking event in September – the first face to face big event we’d held in over a year! Professional networker Jeni Smith from NetKno talked about taking some time to reflect on your achievements before a networking event. There’s a fascinating back-story about Lobsters, but the crux of it is this: remind yourself what you’re good at, what you’ve achieved in your professional career and what you’re proud of… and it gets all the right hormones flowing to start shaking off the overwhelm and fatigue before you even go in.

So how can we make networking “easier” for us all?

You: We’re proud of everyone who was able to recognise that networking is out of their comfort zone but push themselves to turn up. Walking through the door is often the hardest part.

Listening to your mind and body with respect and recognising what you need. If you need to step out, that’s OK. If you want quiet time, that’s OK. Remembering that a lot of people are probably feeling like you helps too. You are not everyone else, you are you and you have different needs from others. If you need to give yourself time to recharge after networking, plan that time in.

Beforehand: I’m not sure if others feel this, but the pre-event overwhelm is so different. For me it’s filled with more anxiety, it feels like bubbles inside my body floating from my stomach and popping anywhere from the chest to cheeks. My head starts to wander off to “I wonder who will be there” slowly speeding up in thought until it’s sprinting, screaming “DON’T SAY THAT!”

Since my head is already running it’s own circus, actually meeting new people becomes a lot more stressful and it’s hard to process it all. For others, it manifests as “I’m not good enough/smart enough/experienced enough to be here” or even straight low energy exhaustion.

Thankfully, these feelings fade away when I get into talking to people and engaging in the event.

For me, it helps to prepare beforehand. Scope out the venue so you know where you are going. Try to be on time. If there is a list of attendees, see if you know anyone or invite a work friend to go with you. Set yourself a goal of the number of people you would like to meet. If that’s five, then your reward can be to leave! But be flexible with yourself. You may find yourself loving it once you relax.

Afterwards: From the comments in the group, it’s clear that many of us experience low energy physically whilst our brains are still scrambling once we leave. We have a task list of follow-ups to attend to and for me, I start replaying conversations hoping that I haven’t embarrassed myself!

The tips our community shared were great: people mentioned getting in the car and breathing, taking power naps, going on a walk, resting mind and body on the nearest available sofa, reading and a bit of social media distraction.

Networking is an undeniably brilliant business activity. New friendships, clients and information can all be uncovered and won through networking. And in these Pandemic times, we’ve all learned the value of in-person human interaction but if networking isn’t for you, that’s ok too. There is a lot of benefit to online communication and marketing, for which you don’t even need to leave the house! MINT’s networking events are welcoming and more informal, so don’t be afraid to pop on in.

If you’re not yet a member of our FREE Business Support Group on Facebook, join now and get involved in future discussions like this.