Tight Hamstrings and a Fear of Lycra 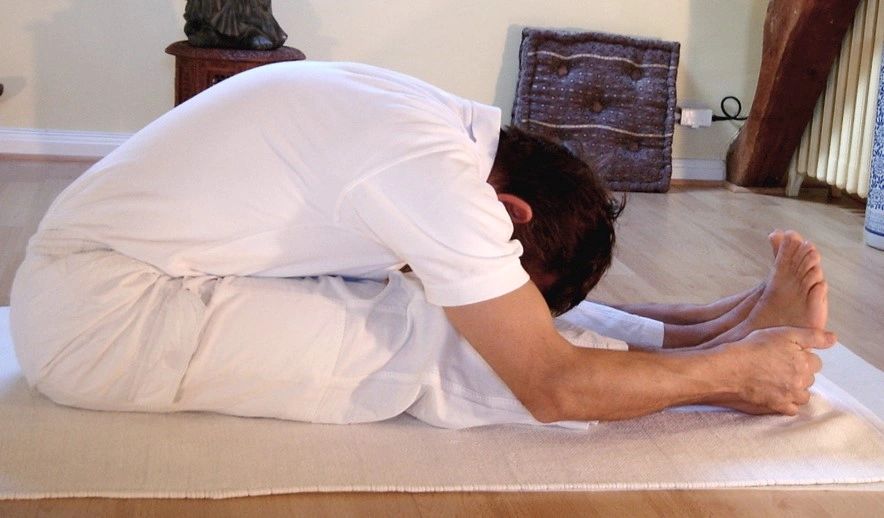 It was spring 1994 when I first decided to try Yoga. I had just turned 30 and in my head that was the first step on the downward spiral to old age and looming infirmity. I might even have discovered my first grey hair!

I found a class in my local Leisure Centre in Consett on a Sunday evening which fitted well with my full time job and busy schedule so I went along to give it a try.

I remember putting on jogging bottoms and a t shirt and hoping that no one would be wearing Lycra or leg warmers. After all Jane Fonda was still selling out in the exercise video department and Mr Motivator was strutting his stuff on breakfast TV in flamboyant figure hugging outfits that came dangerously close to a mankini. Turns out I was pretty safe on that one. There were only three of us in the class including the teacher and we were all dressed like we’d come to fix the boiler. On the down side there was definitely no hiding at the back!

It was all very different from anything I’d done before – the Sanskrit names were a mystery but I could see the rationale in the English translations. Cat posture and down faced dog made sense. I was able to follow along reasonably well so I was feeling pretty pleased with myself.

Right up to the point when we did Paschimottanasana or seated forward fold (see picture) and my chronically tight hamstrings kicked in. Years of cycling and walking made sure that I could barely move more than a couple of inches and I was devastated. I sneaked a glance at the lady next to me and she virtually had her chin on her ankles! Despite being told that Yoga was non-competitive I couldn’t help but feel frustrated and a bit embarrassed. What I didn’t realise at the time was that I was encountering something that would come to define practice for me:

I needed to learn how to explore my limitations without pushing into physical discomfort or mental pain. To stop beating myself up for not being “good enough” and to stop comparing myself to other people. In Yoga terms these relate to the ethics of non harming (Ahimsa) and truthfulness (Satya) which deal with how we treat both other people and ourselves. The idea of being comfortable with myself as I was at any given moment applied not just to my time on a yoga mat but to everyday life as well. That took a long time to sink in – and I’m still not sure I’ve totally mastered it yet – but the seeds were sown at that very first session.

The practice finished with breathing and relaxation and by the end of it I was hooked. I went to classes and practised at home. It was another ten years before I even considered teacher training. I’ve been teaching now since 2008 which sounds like a very long time but ultimately I’m still a student. There is always something new to learn – whether that’s from current research into movement techniques, new ideas about philosophical issues or , as is more often the case, improving my teaching by working with the people who come to my classes. Over the years I’ve definitely changed from the person who turned up for that first class. I have a good few extra grey hairs now and I’m certainly not as slim as I used to be. My Paschimottanasana is still a poor imitation of the one you’ll see in yoga books, magazines or the photo I’ve used for this post but it has improved as far as my body will allow. More importantly I like to think that Yoga has made me a largely calmer, kinder and more compassionate human being and ultimately for me that’s what counts. For the record I do have grumpy days and times when I argue with my husband or end up in loud confrontations with my son. Yoga may well have improved my understanding and awareness but it has yet to make me a saint! And you still won’t find me in Lycra.

Jane Fonda – actress and exercise instructor whose aerobic routines had participants close to heart failure while she didn’t even break sweat.

Mr Motivator – TV exercise guru who choreographed routines for breakfast TV in a bid to improve the fitness of the nation. Viewers responded by watching him from the safety of the sofa while finishing their tea and toast.

Video – an ancient recording/playback system with tape wound between spools and requiring a VCR (Video Cassette Recorder ) to play back via the TV. Obsolete in most houses except ours!